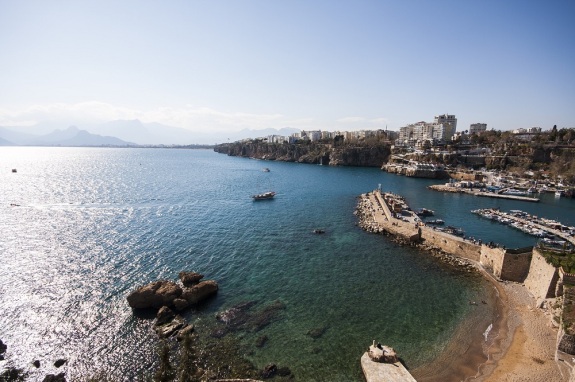 Antalya is one of Turkey’s largest cities and is located on the southwest coast of the Anatolia region. It is also one of the biggest resort cities of the country on the Turkish Riviera and is visited by millions of tourists every year. The history of this city goes back to 2nd century BC when the region was ruled by the Attalid dynasty. Later the Romans established their rule over this part of the world and constructed some of the significant monuments, such as the Hadrian’s Gate. In the years that followed, it went to different rulers until it finally came under the rule of Turkey.

You can enjoy cheap holidays to Antalya if you visit this charming Turkish city during the period between September and mid-December. This is the time when most of the tourists leave the city and the hotels would be willing to offer some attractive deals on accommodations. From the month of January to March, the winter season makes its presence felt in this part of Turkey with moderate to heavy rainfall. The rains can hamper your plans of sightseeing or any of the other outdoor activities, and therefore, it is advisable not to visit during winters. Many of the travellers also avoid visiting during summers as the hot weather becomes unbearable for many.

There are some fascinating attractions you can explore during your cheap holidays to Antalya. Among them is Kaleici or the Old Town, which has many restored old mansions built during the Ottoman era. If you wish to delve into the history of Turkey, a visit to the Antalya Museum is highly recommended. It has many exhibits, including the ones discovered from the excavation sites of Turkey’s coastal region. Yivli Minare or the fluted minaret is one of the famous landmarks of Antalya and must not be missed during your holiday spent in the city.

During your Antalya holidays, you can also indulge in some thrilling activities outdoors. One of them is zip-lining, which can be enjoyed while on a visit to the Koprulu Canyon. A visit to this canyon would also give you the opportunity to try white water rafting, which can be arranged by any of the local tour operators. The quad biking tours allow you to leave the city and head to the desert areas where plenty of fun and adventures await you. Jeep safari is yet another adventurous activity you can enjoy while holidaying in Antalya.

Some of the delicious dishes of the city would truly pamper your taste buds. For a sumptuous meal in the morning, you can try the traditional breakfast of Turkey. It includes feta cheese, hard-boiled eggs, bread, bacon, sausage, salami, and a small glass of black tea. Another delectable treat you’ll get to savour in this Turkish city is the kebab. The kebabs are prepared using lamb, beef, or mutton in ovens that use wood as the burning material. There are many varieties of kebabs, such as the Doner Kebab and Adana Kebab, which you’ll get to choose in the city’s restaurants.

You can click here to find some interesting details on cheap holidays to Miami.